Brain Corp.’s First Product Is a Brain for Floor-Scrubbing Machines

Brain Corp.’s First Product Is a Brain for Floor-Scrubbing Machines 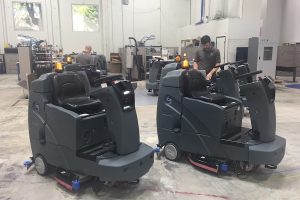 San Diego’s Brain Corp. has a vision for developing the kind of technology that could some day be used to operate self-driving cars. Before getting out on the open road, however, the company wants to show its self-driving system can clean up a mess in aisle 3 at Jimbo’s.
As an independent startup backed by the corporate venture arm of Qualcomm (NASDAQ: QCOM), Brain Corp. began life in 2009 with a lofty goal of reverse-engineering the human brain.

Headed by the computational neuroscientist Eugene Izhikevich, the company maintained a low profile at Qualcomm’s San Diego headquarters until 2013, whenBrain Corp. emerged in the collective glow of the Obama Administration’s brain initiative. The startup moved off-campus in 2014, with $11 million in funding from Qualcomm Ventures.

Like many startups, Brain Corp. meandered quite a bit as it sought to find a way to commercialize its technology, with substantial turnover among its ranks.

But now Brain Corp. is rolling out its first commercial product—a “brain-enabled” commercial floor scrubber that is part mini-Zamboni and part Roomba. As an example of advanced AI technology, it’s not particularly sexy or glamorous. But as a pragmatic industrial product, Brain Corp. stands to gain valuable experience toward the development of autonomous, machine-learning systems and self-driving cars.

“The area we’re focused on initially is the retail industry—big box retailers, malls, and airports,” said Phil Duffy, who joined Brain Corp. two years ago as vice president of marketing and product development. By working with several manufacturers of commercial floor cleaners, including International Cleaning Equipment (ICE) of Holland, MI, Duffy said Brain Corp. has developed a “brain module” that can be installed on manually operated floor scrubbing machines like the ICE RS26.

Brain Corp. has designed its technology to be “hardware and sensor” agnostic, so that similar modules could be installed in forklifts and other manually operated industrial equipment, Duffy said.

Where self-driving technologies under development at big tech companies like Google (and at car-makers like Audi and Mercedes-Benz) must master the automotive rules of the road, including construction zones and ill-defined lanes, Brain Corp.’s approach is similar to Amazon Robotics (previously Kiva Systems). Indoor environments can be easier to navigate, but robots must contend with more random obstacles and frequent human encounters.

Brain Corp maintains that its vision-based A.I. technology can navigate through big retail outlets, warehouses, and schools, without relying on GPS or making any modifications, such as installing magnetic sensors in the floor, to keep the machine on course.

With Brain Corp’s module installed, a floor-scrubbing machine can operate either with a human driver or in self-driving mode.

The system is designed so that a human driver “trains” the module to operate autonomously by simply driving the floor-cleaning route. The module follows the same route. The process does not require the installation of separate mapping or navigation software, or the on-site assistance of Brain Corp. engineers, Duffy said. The company actually has been test-driving its technology on floor scrubbers used to clean Jimbo’s, a San Diego natural foods grocer.

“We have an intelligent system that can follow a prescribed route, but if there are people stocking shelves and moving goods around, it stops, observes, and re-routes,” Duffy said. Using laser and sound-based sensors and cameras, the system also can tell the difference between humans and shopping carts or boxes, and takes a wider detour around human obstacles.

Familiarity with the machinery is an advantage, Duffy said, because “These are the same kind of machines that [retailers] have been buying and using for years.”

While Brain Corp. maintains that its module is cost-effective, Duffy said the company is waiting to disclose its pricing at the upcoming International Sanitary Supply Association trade show in Chicago. Prices for a manually operated ICE RS26 floor-scrubbing machine range from roughly $16,000 to $18,000, janitor not included.

About the Author: Rob Glassmeyer